WHEREAS, the Wescott Family arrived in Currituck, North Carolina ( Manteo was a part of Currituck County until 1870 ) in 1755, and Stuckley Wescott believed to be the first Wescott in 1635 to arrive in America; and
WHEREAS, the Wescotts were one of 7 original families that settled on Roanoke Island, and donated one acre in 1870 for the Old Courthouse in downtown Manteo.”
WHEREAS, the Wescotts were hardworking people, farmers, seamen, postmasters, fishermen, boat builders, merchants, hunters, and guides, the most famous job of the Wescott men is they served as Lifesavers and served the highest rank, Keepers of the Stations. Later many joined the Coast Guard and served for years. And

WHEREAS, the Wescotts were known for their sense of humor, it was said in the Observer June 19, 1878, “Practical jokers, general rule they obey the Bible” and are proud of their heritage and contributions to the Town of Manteo.

WHEREAS, on July 7, 1899 the “Fisherman and Farmer” stated that Josiah Holly Wescott was “an all around good fellow and we are proud to have such a man in a humane service watching and rescuing the imperiled when in shipwreck”.

On October 28, 2017 there was the first Wescott’s of Manteo Family Reunion.  Unfortunately, I could not attend, but hope to next year.  With information from myself, Lou Ellen Daniels (4th cousin; descendant of Josiah Holly Wescott), Juanita Wescott (wife of my 2nd cousin, Colon Wayne Wescott; descendant of Josiah Holly Wescott), and others from the descendant’s of Captain John Thomas Wescott’s brothers, cousins were brought together to discuss their Wescott heritage.

Below are the pages of JT’s siblings displayed at the reunion with contributions from each family.

They visited the cemetery being preserved in the middle of the Manteo Airport.  The stone on the outside of the white fence is John Wescott’s headstone (my 3rd great grandfather), Captain JT’s father.  Wescott Cemetery

From the Wescott Cemetery link above, you will see that several markers are unclear.  This is what Juanita wrote to me after her visit there.

“Theo Fitzpatrick was a confederate soldier. His grave is clear. Many of the grave sites are cement slabs, put there by the government in WWII , about 1940. They say there are slaves buried here. We have been told that some stones were removed and thrown away. William Wescott saw them at the end of a road used as a dump, then one day they disappeared. Also, Malcolm Fearing told me the same story as he was told by his father, Keith Fearing. I believe they were Barbry and John “Jackie” and others as I see Barbry still living beside John and Lovie in 1850 on the census. I can’t find the brothers and sisters of John “Wellington” anywhere. We keep the name Wellington just to differentiate between the Johns. Don’t know where it came from. I only find the name John in signed documents and historical records.”

The “Wellington” reference is from a discussion I had with Juanita and Lou Ellen as to Captain JT’s father, John.  Many people refer to his middle name being “Wellington”, but we’ve never had any proof of that and in a newspaper article, John Thomas refers to his father as John T. Wescott, Sr.

Uncle Read will have to go with me next October.  I have a feeling he and his third cousin, Wilton Wescott, would get along famously! 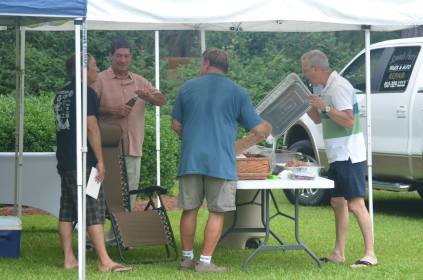 Wilton is an amazing photographer, Wilton C. Photography (view his site), but his life is the Salt Life for sure.

Juanita said, “My favorite moment from the reunion was when the three oldest Wescott men from three of John Thomas’ brothers met for the first time. They were all raised here on the same 12 mile island but did not know each other. ”

The next reunion is the third weekend of October 2018.  Who’s going with me?