As I stated before, the Facebook groups are fantastic for finding #ancestors.  Getting help with #genealogy and #familyhistory on Facebook has been a gold mine for me!  #blogginmyfamilyhistory just got even better for my #lifeofafamilyhistorian.

On October 14, I decided to post on my Prussian Genealogy FB page regarding tracking down the Hennig ancestors from the Rosenberg, Danziger Höhe area.  I listed the “heirs” from Andreas’ death record  and immediately received some wonderful help.  One of the admins from the group found Andreas’ birth record and from that, his parents!  So, now I have his father as Andreas and his mother as Barbara Wohlert.

Another member then posted several marriage of Hennigs from Langenau.  I was able to match up the children of Andreas and Barbara to their spouses and then children from that.  We have tons of Hennigs!

Our 3rd great grandparents were Maria Elisabeth Hennig and Johann Schwittkowski.  Their son, our 2nd great-grandfather, Johann Leopold Schwittkowski and our immigrant to America, took his mother’s maiden name of Hennig.  See Schwittkowski Name Change to Hennig.  She was born in Langenau as was her father, Andreas.  However, although it seems Barbara was from Langenau, Andreas was from somewhere we couldn’t read in the marriage record (see the words where it’s scratched out).

So I then posted this on my Genealogy Translations website and found out that the script above is in Latin not German, which makes sense for the #Catholic records at the time.  We thought the place was Nieda or Sadlowa, then someone stated the first word was Nieder meaning “Lower”.

Here is the translation as it was given to me on Facebook:

I, who (did the same) above, on the day the 28th of May, with three banns having been promulgated and no impediment detected, contracted marriage between Andreas Hennig, originating from Ninda Skadlau(?), age 23 years, and Barbara Wohlert from Langenau, age 20 years, after asking for and receiving the usual mutual consent in front of the church, in the presence of witnesses Paul Gronta(sp?) and Martin Danousk(sp?).”

I am now inclined to think that Andreas’ hometown is most likely Nieder Schredlau, which geographically would make sense.  However, this is still being researched. 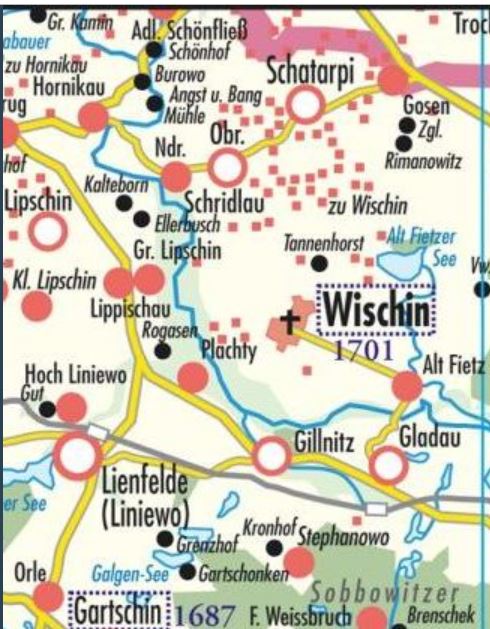 There could be more children, especially between Antonius and Martinus and Anna and Peter, but I have not found any record.  Barbara lost five children at such young ages.   I am unsure why unless the Cholera epidemic hit them.

Their daughter, Anna Maria, had a son, Johann Michael Hennig, on 14 Aug 1836.  She married Christian Richter on 28 Aug 1836.  The index states that Christian was the father,    As I was writing this, someone located the record for me.

# 10 Schönwarling on August 28, 1836
the youth Christian Richter, eldest son of Christian Richter inhabitant of Schönwarling, 25 years old with his betrothed bride Maria Hennig, eldest daughter of the deceased inhabitant Andreas Hennig from Langenau, 21 years old both catholic religion and residing in Schönwarling
Witnesses: And.Mutter(?) and Joh.Hennig
remark: She has consens from the court Dirschau August 22, 1836

They had 12 more children.  She also lost several children at a young age, one- another Peter Paul.

Their daughter, Dorothea, married Johann Hein and they had Anna Maria Hein and Andreas Eduard Hein.

From the marriage record shared to me on Facebook I was able to deem more marriages from Andreas’ siblings, parents being Andreas and Maria Kriese.  Michael married Marianna Piertnitzki in 1863.  I am still working on them.

There are several other Hennigs I have yet to fit in the tree, but I’m getting there.

Now to see what Hennigs I can find in Nieder Schüttlau!

2 thoughts on “The Hennigs of Langenau (Stephanz Family)”