It’s funny.  I’ve had the start of this blog saved as a draft for exactly a year ago this month.  I am not sure why I’ve put off finishing it.  Maybe because I wanted to learn more about her family before I posted it.

Martha’s parents were John Ward Davis and Temperance “Temple” Ann Harrison.  Elizabeth Cofer Reed states in her notes that Charles was married to Temperance, but my sources from genealogy state it was John Ward Davis married to Temperance. Elizabeth states that Charles owned the land where Norfolk Navy Base is now and also had 500 men working under him. She has to mean John. She says he was a sailmaker (so more than likely it is John) and they made all the tents for the Civil War and owned many slaves. There is a newspaper article on John somewhere I’ve been trying to locate.

In reading about the history of the Naval Air Station it doesn’t look like John could have owned that particular land, but maybe the Navy Shipyard? I am  trying to get information about the land he owned.  I’ve written the Norfolk Historical Society to see if they can help me.  It makes more sense that it was the Navy Shipyard as it was built in 1767 and is closer to Portsmouth which is where John and Temperance were married.

Temperance and John had thirteen children, the last child, a son, born a year before John died.  According to my great-grandmother, Ruby,  he “was peeling an apple with a storm in progress, lightning struck, killing him sitting outside near water”.  However, it looks from his Register of Death, he died from Erysipelas.  Maybe he contracted it after the strike? 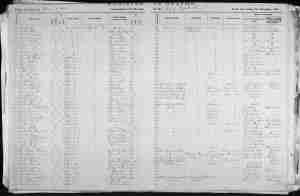 Elizabeth Cofer Reed’s notes state that “Temple” is the niece of President William Henry Harrison, but I have yet to prove that.

Temperance’s death register is below. 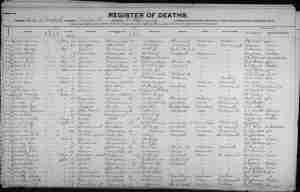 So, this is why it took me over a year to finish this blog.  There is just not a lot of information.  Maybe by posting this, others can help add to the information.

A cousin found through genealogy states “Thomas is the son of Sampson Harrison a AmRev surgeon from IOW and who died either in the Revolution or between 1776-1837” Personally, I cannot find any proof that Sampson was in the war, much less a surgeon.

This is where I hit the proverbial brick wall.  Hopefully the historical society or the research department at the Sargeant Memorial Collection will be able to help me.  The society did tell me  The land where Naval Station Norfolk sits today was farmland for many years up to the early 20th in century. Naval Station Norfolk was established by President Woodrow Wilson in 1917 as the United States looked to be on the verge of entering World War I. it’s possible that Mr. Davis’s property was in that area.

I will definitely be updating this in the coming weeks.  If you have any information that can help, please contact me.

The below book is by a lady who has been helping me with my genealogy for years.