John was baptized in Prussia (updated 3/31/18)  Żukowo, Poland, actually it is a town in Kartuzy County, in the Pomeranian Voivodeship of northern Poland in the cultural region of Kashubia.  Żukowo is about 20 minutes Southwest of Gdańsk.

His parents were Franz Rajkowski and Josephine Tesmer.  They were married in the parish of Matarnia, Gdańsk, Prussia.  (updated 3/31/18)

John had three sisters and two brothers.   He married Johanna Sierotzka in the parish of Pomerania, Poland in 1865 when he was 20 years old and she was 24 years old. They had seven children together.  After 20 years of marriage and at the age of 44, Johanna died.  Their youngest was 3 years old, it was 1885.  (Updated 4/3/18 to show accurate ages from newly found dates)

In January of 1886, John married Augusta Borowska.  That same month they had their first child together, a girl.  Her name was Marianne, a year later Ida Margarethe was born and then died.  A year after that Anna and a year after that, Conrad Theodore Alois.   All were born in Gdańsk, Prussia.  (updated 3/31/18)

John’s father Franz died in 1890, the year Conrad was born.  In 1892, Bertha was born and when she was 6 months old, they headed to America.  Two adults and six children, the oldest 10 years old, departed Antwerp, Belgium on May 13, 1893 and boarded the ship Switzerland for Philadelphia, PA heading to Milwaukee, WI.  They had 2 bags of luggage.  Two bags for eight people!  Amazing.  Can you imagine?

It took a month after arriving in Philadelphia to end up in Michigan.  More than likely they traveled by train.  “In this age of instant digital communications and fast travel, we tend to forget that not so long ago traveling distances were subjectively very different. In the 1800s, for example, traveling a few hundred miles across the U.S. meant taking a steam-powered train, and the trip could take days. Going from coast to coast, which now takes less than a day, could take weeks.” ~MICHAEL GRAHAM RICHARD

Franz is the only one who stayed in Poland and in 1941 died from complications of asystolia (failure of the ventricles of the heart to contract (usually caused by ventricular fibrillation) and stomach cancer .  I know he was married in 1895 so maybe he didn’t want to leave his fiance.  He had a son four months after his marriage.

Clara Rosalie died in Poland, Prussia at age one in 1876.

All his other children ended up in Wisconsin.

Paul Max (probably Maximilian) was born in Milwaukee, Wisconsin, John was 50 years old.  At age 52, Joseph Frank was born, at age 55 Albert, and at age 58, Maximilian Anthony.  Somewhere in between they had and lost two other children.  By the time that Max was born, they had shortened their last name to Reik.

Have you been counting?  John was a very busy man.  He had 18 children!

In the 1900 and 1910 census’ John’s occupation is listed as “Laborer (Round House)”.  A “round house laborer” cleans off accumulated grease and dirt from the running gears of locomotives.  They were also neighbors of their daughters Augusta (the Schwitkowski’s) and Marianne (Mary Placzek on the census).

By 1911, John is still shown as an “AL” (alien), meaning he was not yet Naturalized (the process by which an alien becomes an American citizen).   “It is a voluntary act; naturalization is not required. Of the foreign-born persons listed on the 1890 through 1930 censuses, 25 percent had not become naturalized or filed their “first papers.” (source: archives.gov).

Both John and his son Conrad were working for the railroad at this time.  Paul was a sausage maker in a packing house. 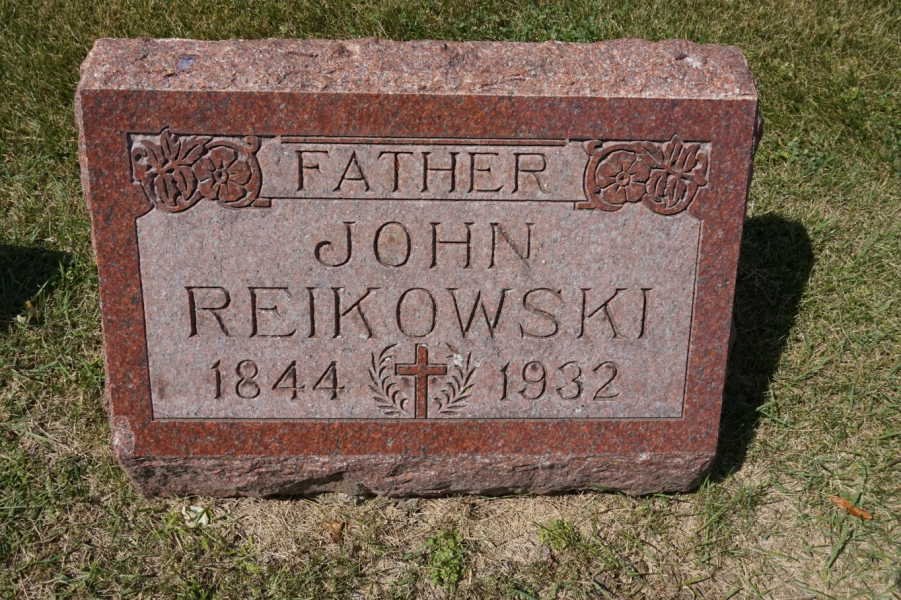 He is buried at Saint Adalberts Cemetery in Milwaukee, Milwaukee County, Wisconsin.

I’ve paid the Archiwum Państwowe w Gdańsku (Archives of Gdansk, Poland) for paperwork on the Reikowski’s.  If I learn anything new from these papers, I will post.

On 3/23/18, I received an email stating they had found me through this blog.  It was Paul Max’s great granddaughter, Mary Reik and her husband John.  My 2nd cousin!  How awesome is that?!  They helped me with her branch of the tree and I sent them some information.  They live in Naples, Florida most of the year.   Oh, and regarding Paul Max dying at such a young age, according to Mary, he died when the ambulance that was taking him to the hospital for an emergency appendectomy ran out of gas.

Thank you for reading.