This one is for my nephew, Dan Logan-Fasy, Attorney at Law.   I’ve followed Dan most of his career and think his ancestors would be very proud of his determination, his fight for those who suffer in silence, and the grit he shows in finding them justice as did his 4th cousin, Walter Seth Logan, Sr. 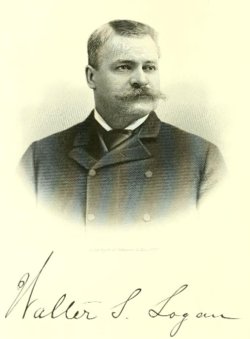 A National Register of the Society, Sons of the American Revolution, Volume 1

Walter Seth Logan was prepared for college in the Suffield Institute and the Fort Edward Collegiate Institute. He was graduated from Yale in 1870, from Harvard Law School in 1871, and Columbia Law School in 1872, in which year he was admitted to the New York Bar. Entering the law office of James C. Carter, he became the assistant of Mr. Carter and Charles O’Conor in the famous Jumel will case, thus beginning under the most favorable auspices a career as a lawyer that has been full of successes and honors.

He has been prominent in Mexican as well as in State and National legal disputations, and is readily recognized as one of the fore most men in his profession. In addition to his professional labors he has found time to devote to literary work on economic, historical and other popular subjects. Among his essays and addresses are “The Siege of Cuautla, the Bunker Hill of Mexico,” “An Argument for an Eight-Hour Law,” “Nationalism,” “Peonage in Mexico,” “A Mexican Law Suit,” “Saxon and Latin Courts,” “A Permanent International Tribunal,” “Needed Modifications of the Patent Laws,” “The Limitation of Inheritances,” and “A More Socialistic State.”

Mr. Logan has been a leading spirit in the several reform movements of New York City, and was Chairman of the Executive Committee of the Ballot Reform. Association of New York State in 1887-1889, whose work has resulted in the present improved condition of our ballot system, greatly reducing the frauds so prevalent under the old system.

An ex-president of the New York State Bar Association, he is a prominent member of the American Bar Association, chairman of one of the most important committees, and at present a vice-president of the association. A member of the Manhattan, Democratic, New York Yacht and many other clubs and’ organizations, legal, social and literary, and a liberal patron, of the arts and sciences, he has also been active in the various patriotic societies of the land, participating in many of their celebrations as an orator. A member of the Society of the Colonial Wars, of the Founders and Patriots, and President of the Empire State Society of the Sons of the American Revolution, he counts as one of the greatest honors he has received his recent election as President General of the National Society. He was married in 1875 to Eliza Preston Kenyon of Brooklyn, New York. They have three children, Hollister (Yale. 1000; Columbia Law School, 1902); Janette– ( Smith, 1905) ; and Walter Seth Logan, Jr. (Yale, Harvard Law)

He had many articles written about him.  One in “The American Lawyer” – Walter S. Logan and his obituary from the New York State Bar Association is quite something to read.  Obituary

Here is a website of some of his books that are now online.  Online Books Page

Walter was born April 15, 1847 in Washington, Connecticut to Seth Savage Logan and Abigail Serene Holister.  He was President General Logan of the Sons of the American Revolution.  The article quoting his speech is in The National Yearbook and mentions that Walter Penn’s Secretary, James Logan, is related to us.  I just haven’t found what the connection is.  His father, Seth is mentioned in several places as well.

Until writing this blog, I had no idea they were in politics too!  Some of these articles about the family above are the first I’ve seen.  It has been a while since I’ve worked on this Logan line and it is amazing how far the online records and digitized articles have come.  I have a lot of work to do, but wanted to share what I have so far.

Seth’s parents were Mathew Logan and Laura Sanford, farmers.  This Mathew’s father was Mathew Logan, Sr.  married to Sarah Savage.  Mathew, Sr. (DAR# A071144) was our Revolutionary War veteran as was his brother, James (DAR# A071130), whose name is also on this memorial.  The Gideon below is Walter’s great-grandfather.

Stay tuned, I know there is more to come.  Keep fighting the good fight, Dan.  Your ancestors are smiling down on you.

Read more about our Logan ancestry at