My 8th Great Grandfather.  Again we find the Wescott’s on the shoreline.

There have been many researchers of the Wescott name.  No one seems to know exactly who our line descended from.  Most of what researchers have found have been from deductions.

The first record of our line is this John Wescott, I from Accomack County (now Northampton) Virginia.  A lot of my information on John comes from “The Miles Files” which is an extraordinary treasure  trove of research that he, M.K. Miles,  gathered from the resources below.  “The Miles Files” were donated to the Virginia Eastern Shore Public Library and includes “over 83,000 names from the Eastern Shore counties of Accomack and Northampton, Virginia; Somerset, Worcester and Wicomico, Maryland; and Sussex Co, Delaware.”  Not just Westcott’s, but “100’s of Families from the Eastern Shore, from Charlemagne to the early 1900’s”.

It is believed that John Wescott, I was born in Accomack County, Virginia in 1659.  Although not proven, his father could be William, one of the three brothers from England, nephews of Stukely Wescott.

It gets confusing with the Elizabeth’s.  M.K. Miles told me in an email he assumes that “George Clarke II’s first wife Elizabeth died after the children were born and then he married a 2nd wife named Elizabeth, who would have been young enough to be the mother of John Wescott’s children.”

John and Elizabeth are mentioned in court records a lot.  The first being  “a court order on 28 June 1690 at Northampton Co, VA. It was on this date that upon the petition of Wm. Sterlinge against John Wescott as marring Elizabeth, the daughter(sic) (widow) of George Clarke dec’d, it is the judgment of the Court and accordingly ordered that the said Wescott send an account to the next Court of the said Clarks estate…”  Sterling is the first husband of Elizabeth.

And, again John was named in a “court order on 2 February 1691 at Northampton Co, VA. On the petition of John Wescott on marrying Elizabeth Clark, the Administrator of George Clarke deceased for valuation of certain parcel of cattle on Hogg Island belonging to the said decedent’s estate and division of same between the said Wescott (in the quality of aforesaid) and the children of the said Clarke…”

“John witnessed a will before 28 October 1698 at Northampton Co, VA. It was on this date that William Kendall, John Wescott and Robert Browne witnessed the will of William Sterling, wife Elizabeth.4 ”

Again they find themselves in court.  In an interesting exchange gone awry between Elizabeth, and Ellenor Carter, freewoman, with many intricacies about the type of 17th century cloth. John Wescott ultimately paid a fine to Ellenor’s husband, Thomas.

*p.46, “We being requested by Mr. Jno. Barons to take ye deposition of Francis Betteley who declareth as followeth. That sometime in October last, being at ye house of Wm. Sterlinge & helping to harrow wheat in company of Harry a Maletto servt. to the said Sterling, which Maletto told ye depont. if I would be silent and not disclose to any person, hee the said Maletto would tell me where Mr. Jno. Baron’s his goods & dowlas was hidd…deponent being in company with John Westcott of Northampton County…ye Dowlas… found hidd…found 5 pieces of Dowlas, one piece Searge made up four square. March 1689/90.”
*p.48, “Deposition of Jane Broadway aged 23 years. Some time since Christmas last Ellenor ye wife of Thomas Carter Negro exchanged a canvas shift with Elizabeth ye wife of John Westcott for a linen shift of two or three sorts(?). To say sleeves, Dowlace, ye body other linen not well known what to your deponent, the gores ozenbrigg: for this deponent and might have had another shift of Dowlace but old and Dawned about the breast in the roome of that taken but afterwards the said Elizabeth Westcott came to your deponent and would have her pay Mr. Pigot for a bushell of salt which she owed him (into the bargain for scandalizing of her & telling Mr. Barons as she said) that she gave a Dowlace shift for a canvas one which ye deponent never did being to ye best of the deponent’s knowledge.”
*Wills & Orders, book no. 13, 1689-1698, Library of Virginia microfilm no. 27a,
p.194, “30 September 1692, Judgment granted Thomas Carter Negro against John Westcott deft. for 1 pound, 6 shillings due p. balance of account.”

Dowlas was one of the most common linens found throughout the period.

Perhaps the most widely used imported cloth was “ozenbrig, ” a tough, coarse linen woven in Osnabruck, Westphalia, which they made up into nearly everything from breeches and entire suits to sheets, table covers, and carpetbags. http://frumiousb.dreamwidth.org/531787.html

“He was named in the settlement of his son’s estate on 12 March 1728. The Court ordered the heir-at-law (his father) John Westcot to appear to show cause why Simon Elliott should not be granted administration of the dec’d Littleton Westcot’s estate. ”

“John made a will on 16 June 1728 at Northampton Co, VA. In his will John Westcott gave his son John during his life 100 A. on the south side of my land and then to my grandson John Westcott. To my grandson Littleton Jarman my other 100 A. with my house and plantation. Remaining estate except for my mill to be div. by my three children John Westcott, Elclanah Barker and Francis Ellit. My mill to remain for the use of both plantations. My son John and my son in law Simon Ellet extrs. Berry and Matthew Floyd to divide my estate. Witt: Matthew Floyd, John Satchell, John Esdell. At probate the extr.’s name is shown as Simon Elliot.6 ”

“He died before 9 July 1728 at Northampton Co, VA. It was on this date that his will was proved.”

John and Elizabeth had five children.

Although it is believed that all Westcott, Wescoat, Wescott, etc. descend from the family of Stukely Wescott, it is hard to determine the exact person our line comes from.  We could come from him, his brother, or his nephew.  It is uncertain.

“Wes” is believed to be from Wessex and “Cot” from Cottage or protected home.

Stukely Westcott’s descendants are many and one of the notable ones is General Benedict Arnold, (descendant of his daughter Demaris who married Governor Arnold and general of the Revolutionary War, who is better known as a traitor to his country)

Regardless of who our ancestor is, it is quite certain they came from England.

There was a note in Ruby Wescott’s things:  However, John T and his five brothers did not come from England, but I do believe his ancestors did.  Maybe one day someone will discover who. 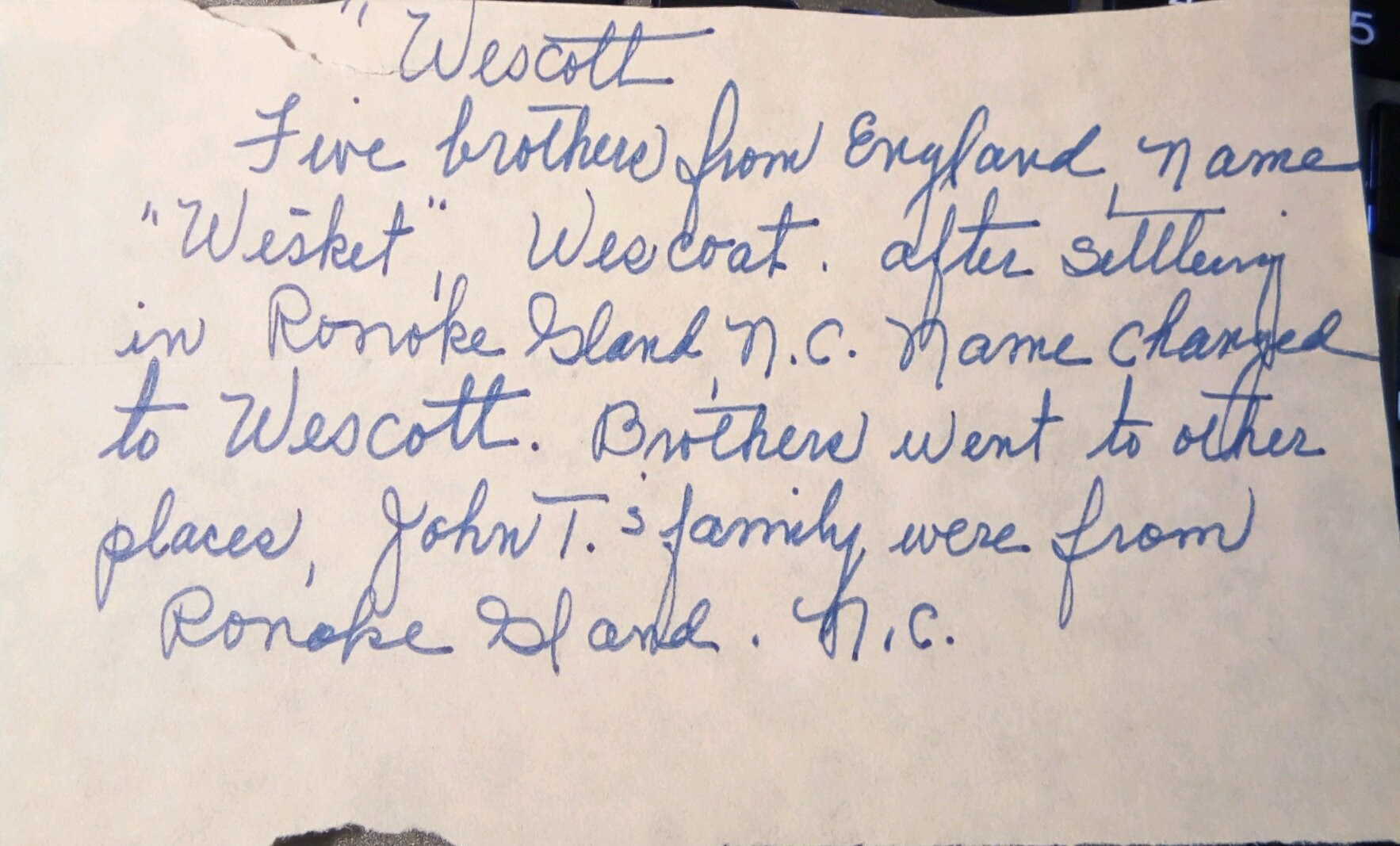 This may give us a hint to our line.  “Beyond the year of Stukely’s birth, 1592, nothing has been positively revealed of the youth of Stukely Westcott. That he was born in the shire or county of Somerset in England of the posterity of Thomas de Wescote and Elizabeth Littleton, his wife, of Wescote in the parish of Marwood in Devonshire, whose descendants settled in Somerset in the late 15th century, there is every belief.”  As you will see, “Littleton” is given as a first name to this John’s son and then again to his grandson and again to a great grandson.

“With the marriage of Elizabeth Littleton, sole daughter and heiress of Thomas de Littleton, Lord of Frankley, to Thomas Westcote, esquire, two of their sons, Sir Thomas and Edmund, took the surname Lyttleton or Littleton while two others, Nicholas and Guy, retained the surname of Westcote;” You can read more about Thomas Wescote here at Thomas Wescote, Esquire, of Wescote

The above picture is from The General Armory of England, Scotland, Ireland, and Wales, Comprising a Registry of Armorial Bearings from the Earliest to the Present Time
By Sir Bernard Burke C B LL D

So, may we go forward with this John Wescott, I and continue to publish our genealogy for our descendants for years to come.