I apologize that it has been awhile.  I would spend 24/7 on genealogy if I could afford it.

This next blog is about my 2nd great grandmother’s family, our immigrant,  Marija Švegelj or, Mary Swegel, and our Gottschee heritage.

Tragedy strikes the family again and their mother, Marija, dies on 12 Jun 1877 leaving our Marija nine years old, Jožef just four, and Peter only one and a half.  Their father, Jožef was left, at age 30, with three children under the age of 10.  It is no wonder that just two months later, he finds them another mother and marries again on 06 Aug 1877 to another Marija, Marija Sterk.  They had seven children together.

Both Marija’s were Gottcheers as was Jožef’s mother, maiden name, Ilić.

Seal of the City of Gottschee

The city of Gottschee was granted
city status in 1471. The seal of
the city shows Saint Bartholomew,
the patron saint of the parish church.

The inscription on the old seal,
Sigilum Civitatis in Kotschew 1471,
is translated,
Seal of the City of Gottschee 1471.

While our Mary Swegel and all her siblings immigrated to America in the late 1890’s, this Marija did not immigrate until 1914 even though her own children had all come over.

The Gottscheers, once privileged in German-dominated Austria, suddenly found themselves a minority in the new South Slav state.   Between 1911 to 1914 they were years of political and military crises.  During the first six months of 1914 the district office of Gottschee issued 700 passports for America.

In 1918, after World War I, with the dissolution of the Austro-Hungarian Empire, the Duchy of Carniola and with it Gottschee became part of the province of Slovenia in the newly formed Kingdom of Serbs, Croats, and Slovenes. Gottscheers were given Yugoslavian citizenship.

The area was insulated enough by geography and culture that none of these changes significantly affected Gottschee—until Hitler came to power in 1933.

At the time, pockets of German speakers were scattered across Europe, in countries like Czechoslovakia, Poland, and Yugoslavia. Some of those people wanted nothing to do with the Reich. Yet Hitler sought a homeland unified by the German language, and he expected far-flung communities like the Gottscheers to help build it. (Source: https://www.smithsonianmag.com/history/attempt-keep-dying-gottschee-culture-very-much-alive-180955915/)

When Adolf Hitler came to power in Germany, the Gottscheers were enthusiastic:   They expected to be annexed, like the Sudeten Germans in Czechoslovakia. Instead, Hitler ceded their homeland to his ally Italy.  In 1941-42, according to Slovenian historian, Mitja Ferenc, 97 percent of Gottscheers were moved north within Slovenia, some willingly and some under pressure, to Rann (now Brezice). Some did not know where they were going or that the homes and farms they were to receive would be taken from Slavs without compensation. The Slavs disappeared — some to Nazi work camps, some to join Tito’s Partisans. (Source: http://m.sfgate.com/news/article/NOTES-FROM-HERE-AND-THERE-2924834.php)

After the collapse and partitioning of Yugoslavia in 1941, Gottschee became Italian territory and the Gottscheer (about 11,200), were moved to the Southeast Untersteiermark (Lower Styria). Like the Germans in Slovenia, they too initially were forbidden to leave when the Russians approached. The order to evacuate was issued only beginning May 1945, which for most was too late. While the exact number of those who perished during the fight or in camps is not known, estimates of the casualties including those of soldiers, run around 1,000.
During World War II, the Gottscheers lost their homeland. Any remaining ethnic German was a potential enemy.  When the German and Italian armies invaded Yugoslavia in April 1941, an agreement between Italy and Germany gave control of the Gottschee land area to Italy. Nine months later, the German government resettled the Gottscheer ethnic Germans from their 650-year homeland. This was done in December 1941 and January 1942, when almost 12,000 Gottscheers were relocated to Brezice (Rann), Slovenia, a forced work camp, that had been incorporated into the German Reich during the war.  Many of the Gottscheer villages were destroyed in battles between Tito’s Yugoslavian partisans and the Italian forces.

After the armistice the British repatriated more than 10,000 Slovene collaborators who had attempted to retreat with the Germans, and Tito had most of them massacred at the infamous “Pits of Kočevje.”
Today, the largest number of Gottscheers and their descendants live in the United States. (Source: https://gottschee.org/history/)  Many Gottscheers immigrated to the United States and Canada between 1880 and 1910. However, some of them immigrated to the United States in the 1860s, making their homes in Iowa, Minnesota, and Colorado. In the 1880s through 1910, most settled in the states of Ohio and New York, while others traveled to California, Colorado, Illinois, Kansas, Missouri, New Mexico, and Wisconsin. In Canada, most Gottscheer immigrants settled in the cities of Kitchener, Toronto, and Vancouver.  The below postcard is from circa 1910.

Gottschee is now Kočevje, in southern Slovenia.  We have several Gottscheer Surnames in our family.  This is why it is difficult to explain where our grandparents come from. Records I have come across used all sorts of names to describe it: Austria, Yugoslavia, Slovenia, the Hapsburg Empire. All those place names were accurate at one time.  But the strangest name was Gottschee (pronounced GO-CHAY).  I had never heard of that.  Have you?

From some Gottscheer’s :  In school, Belay had to learn three alphabets: Cyrillic, Roman, and Old German—a sign of the many cultures that shared the lands around Gottschee. In high school, he had to learn Slovenian in just one year, because it became the language of instruction.

Teachers who spoke German were removed and replaced by teachers who would only speak Slovenian to the school children. This presented a huge difficulty for the Gottscheers since most of them did not speak Slovenian. Problems arose and a feeling of ill will was created.

Edward Eppich lived on his father’s farm in Gottschee until he was 11.  “You had only maybe one or two horses and a pig, and that’s what you lived on,” Eppich recalls. When Austrians first settled Gottschee in the 1300s, they found the land rocky and difficult to sow. “It was not that easy,” he says.

A camp for displaced Gottcheers in Austria after World War II

From the time of their arrival until the end of the war, Gottschee farmers were harassed and sometimes killed by partisans who saw them as an instrument of the occupying regime.   (Source: http://alpineclub.ca/our-story/history-of-the-gottscheers/

The horrible things that happened during Hitler and Tito’s reigns are unimaginable.     Some say that Tito was worse than Hitler, but evil is evil.  Many could not return to their country for fear of Tito’s “purge”.  The Kočevski Rog massacre and killings continued after the war, through 1945.

It is no wonder that Marija would never again see her homeland or her family again.  Her country was torn apart.  The once privileged Gottscheers were now a minority in a war ravaged country.

I am still building this portion of our family tree.  There are a lot of intermarriages among Gottscheers with the Slovenes and Germans and we are far reaching in Slovenia and Germany.

Adolf Eppich says in his memoir, Memories of a Gottscheer Refugee “Gottscheers are blessed to have been part of a heritage that focuses on God and neighbor and strong family values.”  They carried this heritage and faith to America for their descendants to carry on.

Our ancestors would be proud that their country is now free even if it looks nothing like it did before the wars. They would be proud that the Gottschee culture is still celebrated in their beautiful homeland now called Kočevje.  That the Gottschee cuisine is still being served, gulasch, apple strudel, sauerkraut, and palatschinken, a thin crepe, Khropfm (Raised Doughnuts), Shipplink Bread (“Sippenbrot”, loosely translated, family bread) was present in every Gottscheer home during the Christmas season. It was baked the day before Christmas, Stuffing / Beef Gulash, Water Dumplings / Dumplets 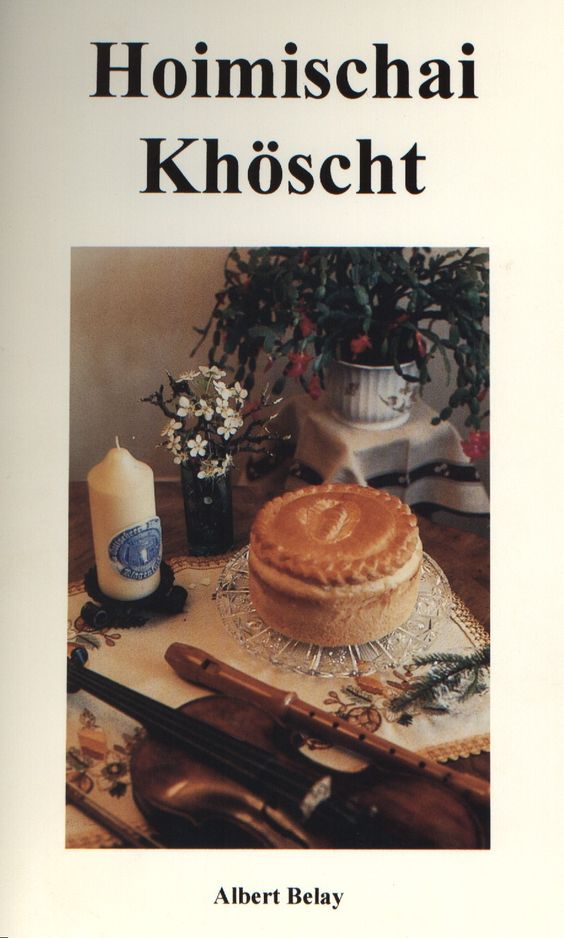